Cats that fight each other is a usual scene for pet owners who own more than a single feline. In general, we all know that cats may have refined movements, but they are not well-behaved. Often, we will see these animals fighting each other. However, do they do so with a killing intent?

Thus, you may ask: do cats kill each other? Cats may have fighting spirit and aggression that will spark a fight even from a simple competition. However, they won’t go as far as killing another. Of course, it will be different if it’s a feral cat. But, in general, always remember that cats won’t kill their own kin.

Cats come from a long line of predators. Thus, they have that fighting spirit in them. Moreover, they are territorial and protective of their young. All these things drive their aggression, making them initiate or continue a fight.

In this article, we’ll tackle everything you need to know about cats, especially their fighting intent. This way, you’ll somehow learn to grasp their behavior and learn to deal with their actions.

Do cats fight to the death?

Cats do fight, but not to the death. While they can be aggressive, they don’t fight to the end, especially if the fight is with another cat.

Felines are self-reliant and solitary hunters. Thus, they avoid conflict as much as possible since it’s a threat to their survival.

If they put up a fight with another cat, they would fight aggressively. However, once the losing cat feels overwhelmed, it will look for a way to escape.

It may continue to be a chase. However, once the pursuing cat comes to the end of what it sees as territory, it will stop.

Of course, incidents would happen that fighting would hurt and injure cats much. However, it’s not likely that two cats will fight without the loser cat running.

Can a tomcat kill another cat?

Tomcats can kill another cat, and they can do so if they feel their authority gets challenged.

Such fights usually happen between two male tomcats. Since they are both struggling for authority over a place or another cat, it can result in a big fight.

It can result in one of the cats getting killed unless someone would intervene.

While the cat’s death maybe by accident, the fight would still have the intent to overpower the other.

Still, it’s not likely to happen, especially to pet cats.

Related: Older Cat Is Playing Rough With A New Kitten

Do cats hurt each other when they fight?

The intentional hurting will happen if it’s a real fight. However, cats won’t actually hurt each other if only a cat play.

When cats fight, they tend to get worked up as they go on with the fight. It will start from simple pouncing and forceless biting.

Once one of the cats gets hurt, it will get worked up for a bit and increase aggression. Once the other side feels it, it will also strike with more force.

In general, cats would have the intent to hurt each other, especially in a real fight.

They would pull show their fangs and claws, and they would start hissing and growling at each other.

For this reason, you may want to prevent your pets from getting hurt by separating them if you feel tension arising between the two.

Should I let my cats fight?

As I said, fighting won’t solve their issues, so never let your cats fight. Moreover, never allow their fight to continue.

If both of your cats are fighting, it would likely be due to competition in resources or authority.

Such an issue is avoidable by giving both cats different resources. By resources, I mean all the things they share, such as space, food, bed, litter box, and others.

If you let your cats fight, it will likely turn out worse for one or both of your cats.

Moreover, your cats may both end up injured. The only way to avoid such incidents would be to separate your cats when they started hissing at each other.

How do you break up a catfight?

A catfight may seem easy to stop, but it’s quite dangerous to intervene in reality. If you try to stop a catfight, your cats’ aggressiveness may turn to you.

For this reason, it would be a bad idea to come between the two fighting cats.

If you would want to break a catfight, you can do it by taking any of the following actions:

You can clap your hands or stomp your feet hard. The noise should make the cats lose their aggression.

Spray water towards the cats.

You can also spray some water on your cats if they won’t stop fighting. The water would be enough to separate them from each other.

Throwing something in between the cats gives some sort of diversion. It will also make their attention away from each other.

Once the aggression subsides, place a barrier between the two cats and separately shoo the other.

It’s important not to touch or grab one of the cats as they can turn the aggression to you.

Approach one or both cats only after some time and once their aggression subsides.

Will a feral cat kill a domestic cat?

Feral cats are wild animals, and they can be more aggressive than a domestic cat. Thus, the wild one can attack and kill a house pet.

Feral cats live in the wild, hunting their own food for survival. On the other hand, house cats depend on the food they receive from their owners.

For this reason, the difference in aggression comes through their necessity.

Since feral cats and domestic cats live in a different setup, they would not likely encounter each other.

Moreover, a feral cat would likely kill a domestic one only if it feels threatened. However, if the intention would be to seek and hunt food, feral cats won’t pursue a domestic one.

How to Stop My Cat From Chasing My Other Cat? Read more here.

Cats have the aggressiveness in them, be it wild or domestic. Thus, fights between their kind happen all the time. While their behavior isn’t trainable, it doesn’t mean their fighting is unstoppable.

Catfights can lead to one or both cats getting hurt. Thus, as pet owners, you’ll need to prevent it from happening and stop it if it happens.

As always, use caution when dealing with such fights since it can be dangerous for you. 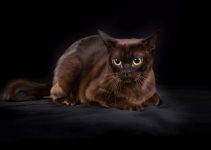