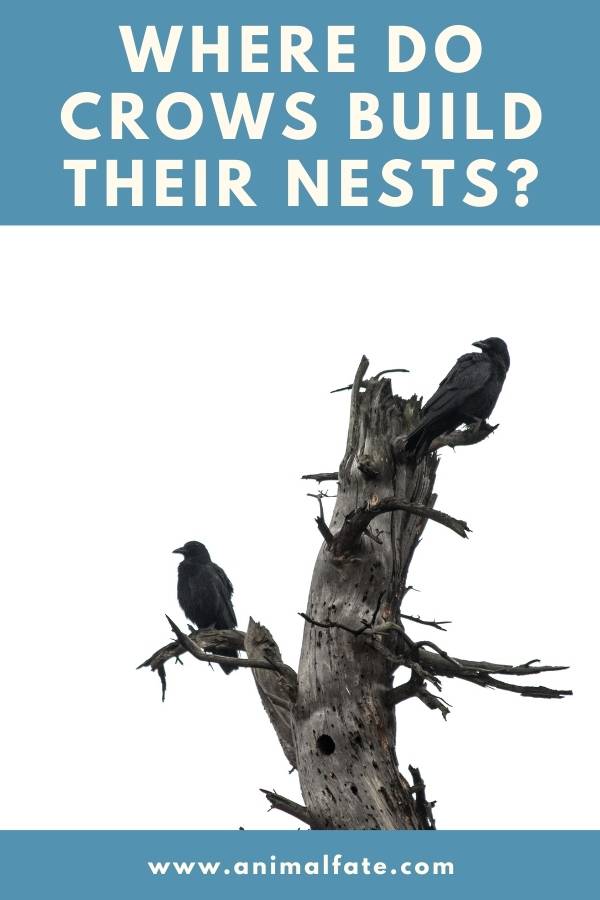 Crows build their nests close to the top of the tree. To do so, they use natural crotches in the branches or near the trunks. Crows prefer to build their nests in conifers where they are safer, but when it’s not possible, they can nest in deciduous trees as well.

Crows are smart birds, and their intelligence isn’t only shown on how they hunt and search for food.

More than their daily activities, they prove themselves smart by their nest.

Let’s see what kind of nest they build!

What kind of nests do crows build?

Crows design the nest they build to suit their nestlings. Thus, it should pass two things, protection and comfort.

As a result, they build their nest with a sturdy outer layer and a soft internal layer.

The outer layer is a composition of stiff branches and twigs. Thus, every nest is enough to make the nest withstand harsh conditions.

Unlike other nests, crows need to make a more substantial nest since they build their nest higher.

For the internal layer, they put soft materials to prevent the twigs from pricking the nestlings. Further, it will keep their young warm and comfortable.

Thus, in their nest, you may find man-made materials like fabric, string, hair, and wood shavings. It can even contain plastic materials.

In the wild, the inner layer of a crow’s nest may consist of natural substances such as bark, moss, and plant fibers.

Now, since they build their nest in such a way, you may wonder if they return to the same nest.

You May Also Read – How do you keep crows out of your birdbath?

Do crows return to the same nest?

Since crows are migratory birds, they move to different places. They do so to accommodate their tolerance of climates.

Still, they do come back, though. And they return to the same nest at least every year, often a few weeks before they do their building.

According to Washington’s Department of Fish and Wildlife study, the nest usually becomes an ideal place for other animals such as hawks and owls.

During the summer season, squirrels also use the nest as a napping platform.

As a result, most nests are already destroyed even before they come back. Thus, corvids that return to the same area usually build nests back from scratch.

So, where do crows nest?

What does it mean when crows gather around your house? Read here.

Where does a crow build its nest?

A crow builds its nest at a high point, around 15-60 feet above the ground. Such nests are usually in the crotch of a tree’s limb or near a tree’s trunk.

They prefer to nest on tall trees, mostly with branches that spread to accommodate many of them. As such, they usually go for conifers or deciduous trees.

In areas that lack tall trees, these birds usually build their nest lower, in hedgerows or shrubbery.

If a crow lives in urban areas, it usually builds its nest on window ledges or buildings’ sides.

If it’s a group, there can be several nests in a single tree, especially if it’s wide enough.

Some build their nest on telephone towers, though it rarely happens.

If you wish to find a crow’s nest, it’s not as easy as it sounds.

How to find a crow’s nest?

Due to their loud caws, you may think it’s easy to locate a crow’s nest. That’s not entirely true.

Despite their loud caws, crows know how to keep quiet. They do it, especially when they are building a nest or when they already have nestlings.

They become silent so as not to attract any danger or threat from other birds.

Thus, you may have to look at the tall trees around when finding a crow’s nest. Look for compressed twigs and branches, and see if a crow happens to fly nearby.

Most crows are smart enough to build different nests to lure their predators.

Upon seeing an empty nest, the predator may not pursue them anymore.

Do you want to get crow as a pet? It might not be the best idea. Learn why.

Where do crows sleep?

Crows use nests for mating and for their young. When they sleep, they often rest in branches near their nest.

The National Wildlife Federation states that crows tend to sleep together at night. This gathering is what we call a roost.

They sleep in trees in large numbers. They do such gatherings every season.

The large numbers are also their opportunity to mate and to protect themselves from harm.

Are you asking how to catch a crow? It’s not so simple. Read more here.

A crow’s nest has an average size of 9 inches high with a diameter of 2 feet.

Their nest has a substantial and sturdy external layer composed of twigs and branches. On the inner part, it contains smooth and soft materials.

The hard materials of the outside can withstand harsh conditions. It has the integrity to withstand strong winds since it’s situated in high areas.

The soft materials on the inside make it a comfortable place for nestlings.

Indeed, crows are smart creatures, and their intelligence is visible on how they live. As a result, they make quite a suitable nest.

Their nest meets the goals they need, these are protection and comfort. They make the outer layer sturdy to withstand harsh winds, while they make the inner layer comfortable and safe for their young.

Image credits – Photos by Will Bolding and Alexander Sinn on Unsplash