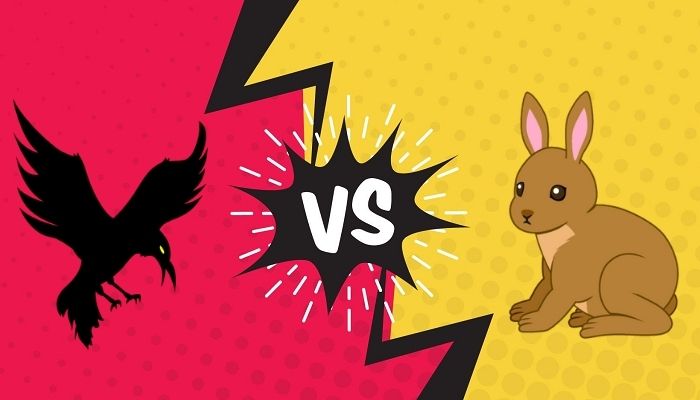 The simple answer is Yes. Crows do eat rabbits. Crows are omnivores, meaning they can feast on both meat and plants. With rabbits having good meat, they become easy targets for crows.

Crows are experts in preying and scavenging. They can be satisfied with fruits and crops and even leftovers from the trash. But, they can also be quite brutal to their prey.

But why would they go for these furry animals?

Are rabbits easy to prey? Let’s find out!

Rabbits as prey to crows

Rabbits are prey animals, making them an attractive target for hunting to predators.

They are herbivores and can please their tummies with only fruits and leafy goods. They would most likely tend to escape than fight back, in case a crow or other predator dive towards them.

This behavior of rabbits can be pretty much the reason why crows would feed on them.

Would a crow attack a rabbit?

As stated above, Crows are predators and scavengers by nature. They tend to take on anything, so long as they have the chance.

These instances really happen, and many people have witnessed the actual scene of crows feeding on rabbits.

Here’s a statement from someone who saw such an instance:

Crows will take on anything they have a chance at – I’ve seen two ganging up and trying to take down a fully grown herring gull that was injured in some way. At the time, the gull could still put up a bit of a fight, though! Chances are the rabbit was ill, injured or old, crow saw a chance and took it. As they don’t have the killing tools of birds of prey, though, it takes them a bit longer to actually make a kill.

Someone even managed to capture photos of a crow taking on a baby rabbit. You can see video of crow hunting rabbit right below:

So, in short, the answer is yes. Crows will attack a rabbit if they have the chance.

While crows don’t have the killing skills like that of the predator birds, they still intend to go for a kill.

Now, the way they do it will amaze you.

How would crows eat a rabbit?

While their beaks and claws are sharp enough to tear the flesh of their meal, it’s not that helpful for killing.

It is possible, as proven by many of their hunting activities. However, even with all their might, it will take longer compared to other predators.

For other predators, a single bite in a few seconds can be enough to kill their target. For crows, it can take minutes of endless pecking.

So, without claws or sharp beaks and even brute strength to prey, crows use something unique.

That is their intelligence.

It’s not a hidden fact that crows are intelligent.

Crows belong to the same family as ravens, and they are in the list of intelligent animals in the world.

Crows do have a pretty big brain. Their brains are only a bit smaller than ours.

With this in mind, crows are intelligent enough to stay away from possible danger.

They would prefer to dig in some corpse rather than going for a chase or a fight.

When it comes to rabbit hunting, they will more likely go for a baby rabbit, because it cannot escape.

Despite this, you shouldn’t think that crows would ignore a live rabbit. As stated above, they would dig in some fresh meat if they have the opportunity.

Aside from preying on dead rabbits and other dead bodies, crows can also be smart predators. It can happen in several ways.

For instance, crows feed on snails and other shelled ones by dropping them on stones from a height.

With the drop breaking the shell, they’ll devour them.

When it comes to rabbits, crows may not be so enthusiastic about chasing them. Yet, they can be smart enough to lure these furry animals into danger.

There were reports that crows drive rabbits away from farms and get them injured in the road.

Most likely, crows would prefer injured rabbits, as they are weak enough to hop towards escaping.

You may think that rabbits are quick and can easily escape if they ever encounter a crow.

Let me tell you that you’re wrong.

Crow or Rabbit: Which is faster?

If a crow and a rabbit ended up in a chase mania, our furry friend wouldn’t stand a chance.

While rabbits are famous for being a quick one, their average speed ranges from 25-45 mph. On the other hand, a crow’s flight can get up to 70 mph.

Once a crow comes near a rabbit, escaping would be futile.

But what can rabbits do?

Rabbit’s protective instinct: Can rabbits protect themselves from crows?

Rabbits naturally have a keen sense of smell, seeing, and hearing. These usually serve as their protective instinct, helping them in times of danger.

These furry creatures tend to freeze in place, camouflaging to hide their presence. They usually do this when they sense a predator lurking nearby.

If their predator gets too close, that’s when they go for a run.

It’s not a good tactic, indeed. And with speed up against fast predators, escaping can be entirely senseless.

Now, are crows the only birds who pose a danger to rabbits?

The quick answer is no.

Do other birds eat rabbits as well?

Aside from crows, there are other birds that rabbits should watch out. These are:

With their remarkable sight and nocturnal abilities, owls can be dangerous for rabbits.

These birds are famous for their tactic of using their keen sense of hearing. They wait in patience and can take on baby and small rabbits should they come out.

When hunting in groups, they can even take down a big rabbit.

Rabbits are also in danger in front of hawks.

While male hawks tend to prey more on other birds, their female side favors mammals more. Once again, rabbits aren’t an exemption to this.

The hawks that frequently feed on rabbits are the red-shouldered and red-tailed ones.

Eagles are famous when it comes to being a rabbit predator.

With their speed and strength, they can outrun any rabbit who pops on their way.

To wrap everything up, here are the essential facts about crows, with their rabbit diet.